Once in a while, there comes a motorcycle that is so loud you would be forgiven for mistaking it for a Boeing 747 airplane. Perhaps you have wondered, why someone would throttle their motorcycle exhaust pipe to make so much noise that it would not be a surprise if the deaf hear it. Is it necessary or is it too much? Is it even legal? Riders who support reviving loud engines argue that it really helps them get noticed on the road and reduces the chances of an accident. Other riders just like it for the sheer aggressive feeling that it evokes. Furthermore, it helps the rider stay in tune with the engine. On the other hand, those who despise loud motorcycle engine counter that there are better quiet ways to get attention on the road. Like wearing bright colored helmet or jacket and investing in an effective horn. Of course, nobody wants to be woken up early in the morning by a loud motorcycle passing through the neighborhood.

The exhaust pipe audibility- Unless your bike is modified, the exhaust pipes are pointed backwards. That means the engine roaring noise is concentrated at the back and the motorcycle is moving forward. However, saying that the sound will be left behind is incorrect since sound travels in all direction at a speed of 767 mph. Even Buggatti Veyron, the fastest car in the world, cannot surpass the speed of the sound coming out of a loud revived Harley or Triumph at a close distance. Hence, those driving ahead will overhear the exhaust pipe rumble but not louder than those tailing behind. The pitch of the sound also comes into play and sometimes the car driver in front will not always hear the roaring engine of your motorcycle until a few meters close. Not to forget that most of the latest top notch cars seem to have turned down the volume of external noise. 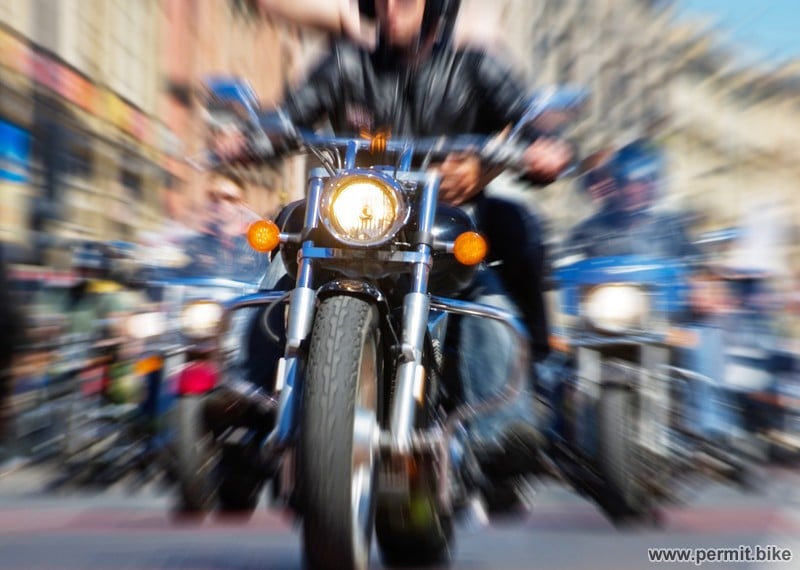 What are the side-effects? Sometimes instead of alerting a person, loud sudden noise can frighten a driver or pedestrian to make adrenaline induced decisions. It is also possible that the hyper-physiological state caused by non-muffled exhaust pipes can influence the rider to make poor decisions sub-consciously. In fact, loud train sound-like horns have been banned in some states such as Florida due to startling other drivers leading to an accident. Bear in mind, there is not much of a difference in the sound intensity. Additionally, loud motorcycle riders are at a higher risk of developing temporary threshold shift or tinnitus especially if they do not wear adequate hearing protection. The repercussion is the riders will only hear the sound of their engine while other alert systems are filtered.

What does the law state? The law pertaining to loud exhaust pipes varies on different states. For instance, in California the maximum limit allowed is 92 decibels whereas in Virginia it is 80 decibels. Although it depends on the year it was manufactured and type of exhaust pipe installed. In Chicago, noisy motorcyclist can be fined up to $500 while in New York your pipe can attract a fine of $400 if it is heard from 200 feet away. Other places such as Carefree in Arizona will get you slapped with a $750 hefty fine for exceeding 80 decibels without a muffler. Most racing certified motorcycles across the states are exception to that rule. Regardless, enforcing such statutes is not that simple. Most motorcycles manufactured after 2013 have federal EPA label affixed on the engine. In order to know if the motorcycle is against the regulations, a calibrated decibel meter should always be within reach of the traffic police. Unfortunately, most traffic police are not equipped with calibrated decibel meter and instead, they have to rely on sound estimation.

Installing straight exhaust pipes depends on the preference of the motorcyclist. If you are living in Milwaukee, Harley-Davidson’s play ground and renowned for Harley museum, then you will probably feel left out if you are a motorcycle enthusiast. Moreover, loud engines make it easier to change lock at corners while adjusting to the engine. The pedestrians are also likely to overhear your earth trembling noise and pave way without much commotion. It could probably be the reason why that car in front did not turn left or right suddenly without fair warning. Nevertheless, loud revived engines are considered secondary pre-caution methods rather than primary options such as yellow jackets and loud horns.