Most of us who ride motorcycles prefer finding wide-open roads and avoid city traffic.  The fewer the cars, the better we like it; and we spend most of our miles on roads like these.

So, unless you are a commuter, forced to ride into a city, most of your skills are developed outside of this context.

However, even if you are a diehard back roads rider, you may have times when your route will take you through a town or city where you will be forced to find your way through at least some traffic to get on with your journey.

There are some things to consider when riding in traffic, versus the skills it takes to cruise the open road. 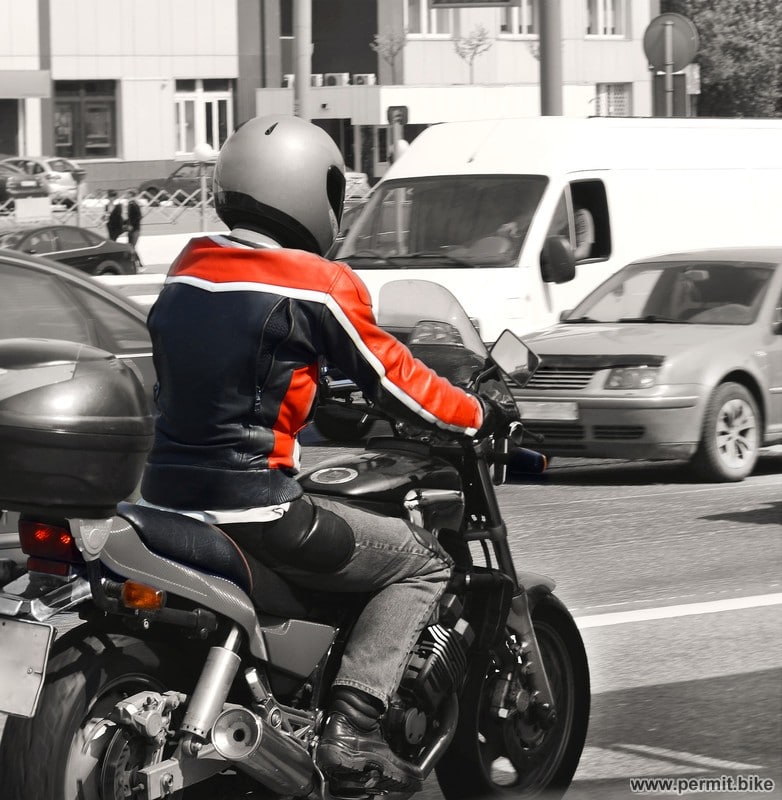 Don’t put yourself where people would not expect to see a vehicle.

You’re in traffic, and you can see a nice narrow walkway that you could easily cruise down.  It’s tempting when you see those spaces to want to go through them.  However, a good rule of thumb is, do not put your bike where other vehicles do not expect to see you.  Even in states where lane splitting is allowed, it’s still dangerous.  As we know, cars don’t always look out for motorcycles, so you increase the odds of an accident by trying to avoid traffic in this manner.

Just be patient, wait, and stay out of the bicycle lanes!

Avoid the middle of the lane.

As you know, a single lane for a car is really three lanes for a motorcycle.  So we have the choice to stay in one of the three “lanes”, but in heavy traffic it’s best to avoid the middle lane for two reasons.

First is the condition of the road; high traffic areas means that cars and trucks often stop and wait.  That means that any liquid, like oil or antifreeze drip and accumulate in the middle lane.  You can normally see the darker spots, so try to stay out of this part of the street.  This goes double for times when it is just starting to rain.  Even a summer sprinkle can cause those areas to be slick.  Watch were you ride, and where you put your foot down!

The second has to do with visibility.  Remember at intersections, staying in the right lane (as opposed to the far left) can keep you more visible to cars crossing the intersection on your right.  This is especially true if there is a car in front of you that might block your visibility causing a vehicle to pull our right in front of you simply because was no way to be seen by them.  This can happen even when they are looking – you are just blocked from view for them.

Use traffic lights to study the vehicles around you.

Traffic normally moves slower where there are traffic lights, and this can be annoying – especially on a hot day.  However there is an advantage to this.  You have more time to observe what is going on around you.  You can study the behavior of drivers around you, because chances are they will stay with you until you get past the heavy traffic.  You can see the ones that are driving aggressively (changing lanes quickly and without warning), before they come into your space.

This way you can learn whom to avoid or simply let them pass you.

Also don’t get in the habit of just staring at the light, waiting for it to turn green.  Watch the other lights around you, as they turn from yellow to red.  This will give you a heads up and you’ll be ready.  But, don’t rush through an intersection too fast, that is not smart.  Remember, some cars will speed up to run that yellow light.  Don’t just depend on a green light to tell you it is safe to move!

Traffic can’t always be avoided, but with just a few tricks and some common sense, you can navigate safely.

My next blog will be on layering up for colder weather!

Until then; remember, ride safe, ride smart, and have fun!