What styles of bikes are out there?  How do I choose the right style and size for me?

When I first got into riding, I almost bought the wrong motorcycle.  I was new to the sport, and it was only by listening to the advice of some friends that I avoided making a terrible choice for my first bike.

Like many of you, I googled around to learn what a good “beginner” motorcycle would be.  There was one name that kept coming up and that appeared to be a great choice.  However even if the style were right, the size would have been all wrong for me.

When it comes to motorcycles, size matters!  Both the frame of the bike and the engine power should be taken into consideration.   A motorcycle that may be perfect for a man the size of Tom Cruise, would not work for someone the size of Arnold Schwarzenegger.  Keep in mind, the motorcycle not only has to fit you (a good indication of this is, can you reach the handle bars comfortably? are both of your feet flat on the ground when balancing the bike?), but it also has to have the power to transport you and your passenger (if you have one).

The frame is easy enough to figure out, just sit on the bike!  But for engine size, we need to know how to talk about the CCs.

The greater the number of CC is, the more powerful the bike.  Therefore, depending on the style, it can either haul more weight or go faster with increased CCs.

But what exactly are we talking about?  How can we give that number a little more meaning?

A motorcycle has, well…  a motor!  This motor works like this.  Picture a chamber.  In this chamber an explosion takes place. This explosion forces a device, called a piston, downward.  This downward motion is then transferred to the circular motion that turns your rear wheel.

And there you go, down the road with a tank full of gasoline, and an engine propelling you with countless mini explosions between your legs.  Welcome to the wonderful world of motorcycling!

Now to better understand this, picture that chamber as an empty coffee can.  A motorcycle has at least one, to as many as four, of these coffee cans.  The combined empty space inside the coffee cans will give you your cubic centimeters.  More space => bigger explosions => more power.

So in discussing different motorcycles, keep that number in mind.

The four basic styles of bikes are standard, cruiser, sport and touring.  Now as a disclaimer, you can have bikes that are combination of several of the four, but let’s just stick to basics for now. 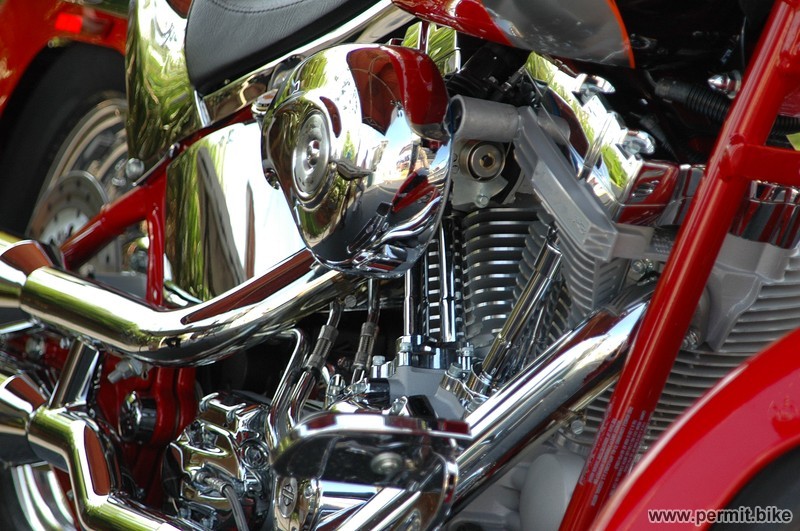 Standard bikes, also called naked or street bikes, are multipurpose motorcycles.  They have an upright riding position, somewhere between the reclining rider posture of the cruisers and the forward-leaning sport bikes. Triumph Bonnevilles and Royal Enfield Bullets are great examples of a standard motorcycle.  These make a great beginner bikes!

Cruisers are styled after American motorcycles from the 1930s to the early 1960s, like the ones made famous by Harley-Davidson and Indian.  Their engines are tuned, not with speed in mind, but having the power to work.

The riding position places the feet forward rather than straight down and the hands can be placed relatively high, so that you’re leaning back slightly when you ride.  At low to moderate speeds, cruisers can be rather comfortable, but riding for long periods on the highway, this position can lead to fatigue.

Sport bikes stress speed, acceleration, braking, and cornering; typically at the expense of comfort and fuel economy compared to other motorcycles.  If you like going fast, this is the bike for you!

The rider sits in a forward-leaning position with his feet tucked behind him. This makes his body as aerodynamic as possible.

These bikes have high performance engines combined with a lightweight frame.  Everything about them is designed to go fast and handle well in turns.  If you watch a motorcycle race on TV, chances are you are looking at speed bikes.  One of the most common speed bikes I often see on the road is the Kawasaki Ninja.

Although any motorcycle can be equipped and used for the purpose, specific touring motorcycles are designed to cover long distances.  They have large engines, fairings and windshields that offer good weather and wind protection, large-capacity fuel tanks for long ranges between fill-ups, and a relaxed, upright seating position (often including a back-rest and cup holder).

Passenger seating is excellent and expansive luggage space is the norm for this type of bike.  You may hear these bikes referred to as Baggers.

So, now that you have your grasp on some of the basics in motorcycle styles, get out there and start shopping!

In my next blog we will discuss helmets.

Until then, remember, ride safe, ride smart, and have fun!